Opening of the FreiLacke administration building

Opening of the FreiLacke administration building

Following just one year of construction, FreiLacke is moving into its new administration building
The existing building was completely renovated and another floor was added.
Using the latest sound insulation and lighting concepts, 70 state-of-the-art workplaces for the different commercial departments were created on a space of 1,407m2.
The plans for the modernisation of the adjacent original building have already been drafted and will be implemented in due time.

The rapid growth that FreiLacke had experienced in recent years compelled the family-owned company to invest in infrastructure and buildings.
Following the grand opening of the expansion of the powder coating production (including a logistics centre) in September of 2019, the new administration building has now also officially opened its doors. “The commercial departments grew along with the entire company and some of them were approaching their limits. That is why the expansion of the administration building was deemed to be an investment priority and implemented quickly and successfully”, said Dr. Rainer Frei.

An additional floor was added to the existing two-storey building and it now offers room for 70 employees on a space of 1,407m2. “Together with the architects and design planners we engaged in an intensive planning process that also involved the departments for the requirement analysis. Ultimately, the project was implemented very quickly and on schedule thanks to the collegial and professional teamwork everybody demonstrated”, said project manager Sandra Gehringer in summarising the project.

Resource preservation, accessibility, sustainability and ergonomics became pillars of the project even in the planning stage.
Thanks to the renovation, the existing building achieved the KfW energy-efficient house standard of 70 and the new building achieved a standard of 50.
For example, the toilets are flushed using rainwater collected on the roof. The building is heated using a low-temperature system and the exterior facade as well as the basement walls received extensive insulation.

Cutting-edge workspace concepts were integrated into the design of the workstations.
As a result, the building now features open group workstations, conference rooms on all floors, glazed single and double occupancy offices, communication hubs as well as central, encased printer stations.

The latest sound protection and lighting concepts were implemented and state-of-the-art office furniture, such as height-adjustable desks, was installed to allow employees to work ergonomically. 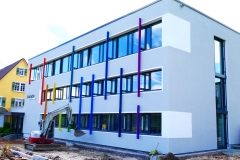 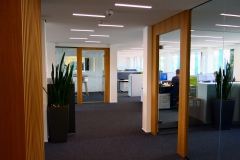 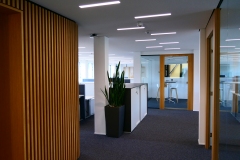 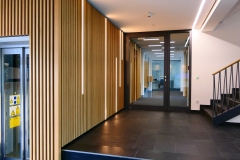 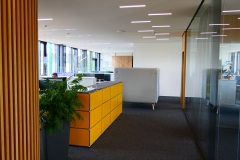