FreiLacke focusing on its operations in Döggingen

FreiLacke focusing on its operations in Döggingen

FreiLacke will begin expanding its Döggingen location by approximately 5000 square metres at the end of the year. 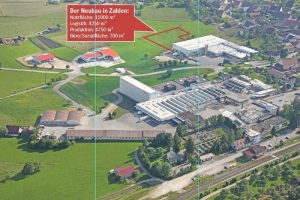 With this decision, managing directors Rainer and Hans-Peter Frei are not merely committing to the Bräunlingen district; they also want to score on the economic and employment markets. The two key goals to be achieved following the expansion are the continuation of three-shift operation and the improvement of employee workplaces. “Because of the order situation, we will have to work in four shifts until the expansion has been completed. This means that we will also work weekends”, explains Rainer Frei, then adding: “That is not how we normally want to do things at all. However, in this situation we have no other choice.”

Hans-Peter Frei regards such workplace improvement as fundamentally important, both to provide employees with ideal working conditions and also to continue presenting the company as an attractive employer on the employment market. “A company that wants qualified workers has to be able to offer the commensurate working conditions,” explained Hans-Peter Frei. That includes minimising any emissions, such as dust and noise. “And not only inside the buildings, but, particularly in the case of noise, also outside company buildings out of consideration for the neighbours.”

According to the two managing directors, the concept that FreiLacke has spent planning within a 15-strong project group for around one and a half years will optimise work processes. For instance, in the new building workplaces are laid out in a way that improves the material flow. “We are not simply constructing a hall to subsequently place machinery in. First we planned the production steps, then we designed the hall layout,” said Rainer Frei. The company based the concept on a “master plan”. We discussed with employees what an ideal extension on the greenfield site could look like. “Based on the feedback, we then combined the new ideas with what we already had until we came up with the current concept,” declared Hans-Peter Frei.

However, making the decision to expand the Döggingen location was not easy. “We have the principle of doing everything possible to maintain the location”, says Rainer Frei. Nevertheless, the question of whether such investment would be practical still had to be asked. “Our export ratio is approximately 42%, but we can still carry out effective production in Döggingen and the support for medium-sized companies in this region is also greater than in other areas.” Because of this, we were able to fully commit to the Bräunlingen district. In addition, the building expansion will result in the increase of personnel. “We currently employ around 90 people in the powder coating production area. During the four-shift operation period, we are aiming to add about 20 employees”, explained Hans-Peter Frei. As soon as weekend production ends, we can begin to produce in three-shift operation again. If the order situation doesn’t change, this will not influence the number of employees.

The company has been planning the expansion for around one and a half years. FreiLacke aims to submit the building application in the middle of this year and begin the civil engineering work on the parking spaces at the end of 2016. The managing directors estimate the construction time for the entire project to be approximately one year. The interior work is earmarked for the start of 2018, while the warehouse in the new building is expected to be in operation by spring, with the powder coating production due to begin in the new building as of mid-2018.