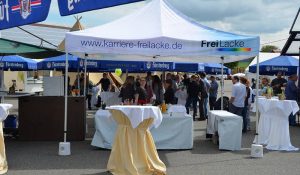 When he opened a wholesale paint business in 1926, company founder Emil Frei Sr. probably did not envision that he had laid the foundation for FreiLacke, which has turned into a global company with 500 employees and annual turnover of more than €120 million.

On 17 September, this special occasion was celebrated together. The focus of the event was intentionally not placed on fixed items on the agenda and long speeches but rather on the families and friends of the 500 employees that had been invited to the big family day.Die 1200 Besucher konnten sich über Betriebsbesichtigungen, Kinderprogramme, reichlich Essen und Trinken sowie Musik freuen.

The 1,200 visitors were treated to company tours, a special program for children, lots of food and drinks as well as music.

On the previous day, the staff had been informed of the current status of the “FreiLacke 2026” long-term positioning. It includes the company’s long-term goals up to 2026, i.e. its 100th anniversary. Employees are kept up to date on its progress on a regular basis.

As one of the region’s largest employers, FreiLacke not only fulfils an important social function but its training and family policies have also been exemplary for many years. They are part of the company’s recipe for success as they create a permanent basis for competent expert personnel and great staff loyalty. With a training quota of about 10 percent, young adults start their careers at FreiLacke year after year.