The grey junction and distribution boxes that can be found on pavements, in front yards or the edges of properties largely go unnoticed. Only children sometimes use them when they play hide-and-seek or as pommel horses. Their housings are exposed to the elements every single day – sometimes for decades. Those who take a closer look can detect the weathering of the top coats of older models, as well as the corrosion of the resin layer on the surface, which allows the fibres of the housing to become visible. The result is that not only their optics suffer but, to a small extent, also their mechanical properties and fire-resistance.

Mitras Composites GmbH from Radeburg near Dresden manufactures these types of housings. The company uses a sheet moulding compound (SMC), i.e. plate-shaped, dough-like moulding materials made from thermosetting reaction resins and glass fibres, to produce the individual components. The flat fibres guarantee very good mechanical properties. “The SMC is moulded in 150°C steel pressing tools and, thanks to the pressure and high temperature, is distributed evenly within them. The polymerisation being used ensures a crosslinking of the material and cures it when it has reached its final form”, explains Sebastian Titze, a Research & Development project manager at Mitras.

A customer for whom Mitras also produces cable distribution cabinets demanded an increased surface quality. Until recently, the production of the components had been a very logistically complex process for the Radeburg-based company. The components were wet-coated at an external job coater but then brought back to Radeburg for shipping. “Overall, nine separate process steps were required until the component was ready to be shipped”, Titze explained. “Frankly, the effort was enormous and very expensive”.
With regard to the increased surface quality, “the customer particularly wanted maximum weather and scratch resistance, but also a high anti-graffiti protection as well as a very high resistance against aggressive cleaning agents and corrosive solutions that are used for removing any smearing” the project manager explained.

That is why we tested our Powder In-Mould Coating (PIMC) process at Mitras in early 2015. In a single-step process, electrostatically charged powder coatings that are based on UP resins are applied onto the hot mould. During the hot-pressing process the coating creates a chemical compound with the material. This compound is scratch-resistant, and also very resistant against chemicals, graffiti and UV radiation, which is particularly important for outdoor uses. The team built a manual sampling plant in-house. The initial manual coating attempts were very promising, Titze said. However, the process engineers realised right away that only an automated solution could be used for series production. Later in the same year, Mitras built one – once again in-house. It included a robot, an extraction system and a powder plant. 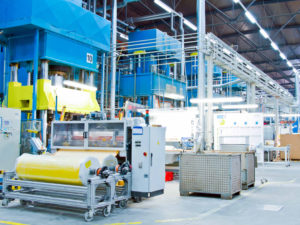 In FreiLacke, Mitras found a reliable coating supplier for the process: “We received a lot of support during the application process. When the process was introduced, FreiLacke employees were literally available to us around the clock. Time and time again, short-term adjustments to the powder were possible”, the engineer said.
In its laboratory in Döggingen in the Black Forest, FreiLacke has a state-of-the-art laboratory press with cooling unit that meets all of the requirements to create samples for viewing or inspections. “We used it to perform experiments on the original substrate with different time, temperature and pressure settings”, Peter Lobendank, System Coordinator Industries at FreiLacke, explained. In addition, many surface and cause analyses were conducted in the laboratory until the correct parameters were found. The FreiLacke team also assisted the company from Saxony with the implementation of the process, the improvement of the application efficiency, the plant design and much more. “We were also very satisfied with regard to the development work”, said Sebastian Titze. Therefore it is no surprise that the two companies have launched the next joint project in the meantime.

PIMC offers a wide range of colours since nearly all RAL colours can be used. However, the cable distribution cabinets receive a plain grey coat at Mitras. In rare cases, orders call for green or orange – the latter particularly for municipalities. In addition, PIMC can also be used for special applications, such as high-gloss, multiple colours and metallic granite effects. The material is free from solvents, hazardous substances or carcinogenic raw materials. “PIMC is fire-retardant in accordance with EN45545, HL3, R1 and, thanks to its good properties, can be used for many applications. Its high weather resistance makes it perfect for use outdoors. In the facade standard area, our PIMC coatings achieved a residual gloss of more than 50% in tests of 300 hours according to QUV-B”, explained Peter Lobendank. Thanks to its barrier properties, PIMC is also suitable as a primer for the automotive industry.

One process, many factors

Sebastian Titze called the transition to PIMC a “core learning process”. It was very complex and demanding, because some new tools had to be built and brought up to standard for series production. In addition, the process involved many factors – the powder coating as well as the SMC material, the temperature and the moulds. “All of these parameters are subject to variations – each of which affect the process”, Titze said. Thanks to continuously pursued experimental designs, an optimisation as well as an improvement of the development process could be achieved on all levels.

Mitras has now been using the process for six months. However, not only the surface quality has benefited from the transition to PIMC in Radeburg. The handling of the components has also become more efficient. The transition permitted the elimination of several process steps – the integration of the external service provider and the complex logistics are no longer needed. The components remain in-house until they are completed and can then be shipped immediately.